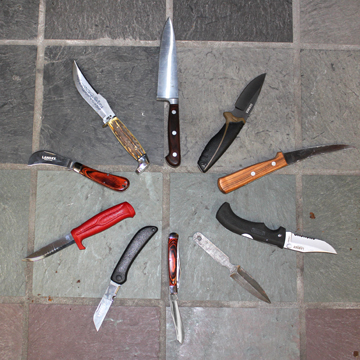 If you took the time to read my last blog post, “Knife Edge Grinds and Uses”, then you should have a fairly decent idea of the different knife grinds out there and what they are most commonly used for. The edge or grind on a knife is the true “technology” that allows us to use a knife properly but in many cases the shape or profile of a knife blade can be equally important. Much like the grind of knife the profile of a knife implies a lot about the blades use and can also say a lot about culture, utility and history of the knife you carry.

**”tip” and “point” are used interchangeably

A simple blade has a straight spine with a curving edge that meets to form the tip of the knife, which is on the same plane and parallel to the spine of the knife.  The straight spine of this knife allows the blade to be used with both hands for safely adding pressure.  This also allows the user to concentrate the force of their cut to a smaller area, which increases the cutting edge’s effectiveness.  The simple blade is a very strong blade type, these knife profiles are ideal for heavier work such as batoning wood and cutting heavy rope or roots.  The simple blade is a must have knife for people trying to improve their sharpening skills and knowledge.

A trailing point blade has a large curved edge and the spine curves upward to meet the edge forming the tip of the blade. The tip is generally found higher than the handle in profile and gave rise to the name “trailing point”.  The curve of this blade allows for greater surface area of the edge (called a ‘belly’) which aids in slicing, slashing and making long, even cuts.  This type of knife profile is most commonly used for fillet knives, but also seen in slashing weapons.  The large surface area of the edge combined with the thin tip make it ideal for processing fish and other small wild life.

A spear point blade is a symmetrically pointed blade with a tip that is in line with the center line of the blade's axis. Generally formed with double edges, a spear point blade is primarily used for piercing and is considered a thrusting weapon known as a dagger (although dagger is a broad term used for many types of blades across many cultures).  Many modifications throughout the years have produced a variety of single and double edge spear point blades on fix blades and folders but the design is generally not practical for everyday carry and is primarily used on tactical or fighting knives.

A tanto style blade, sometimes referred to as a chisel point blade, follows the tradition of Japanese swords and daggers.  This single edge blade has a straight spine and a primarily straight edge until it approaches the tip of the blade.  Close to the tip of the blade, the edge angles upward to meet the spine at a straight or slightly convex angle. This produces a very strong and durable tip to the blade due to the blade thickness present at the tip, but also slightly decreases its effectiveness for piercing.  Tanto style blades have become very popular for everyday carry folders and tactical fixed/folder knifes.  These blades can be difficult to sharpen due to the angle presented at the tip of the blade but have found a home in modern knife culture as a very popular blade type.

Sheepsfoot blades have a completely straight edge with a spine that convexes down to meet the edge at the “tip” of the blade. This design produces a very safe knife with no actual “tip” to pierce with.  Originally used to trim the hooves on sheep, the sheepsfoot blade is popular for fine work such as woodcarving or even electrical work.  Sheepsfoot blades also have a long history of being used on ships to cut rope because when a ship rocks suddenly you are unlikely to stab yourself with the blade.  Sheepsfoot blades are great blades that don’t get enough use, the perfect blade type for teaching wood carving, knife sharpening and knife skills for newbies/children.

A hawkbill style blade is simply a blade that has a concave cutting edge and a claw like shape.  Hawkbill blades don’t have much of a tip for piercing but are ideal for cutting and carving, especially long cuts like when installing carpet or linoleum.  The shape of the blade and cutting edge allows the hawkbill to grab material easily and reduces the risk of accidently stabbing yourself if you slip up.  Hawkbill blades also have a long history of being used as a slashing weapon in eastern cultures.  The Hawkbill has also found resurgence as a defensive tool today with modern tactical/fighting blades.

Although there are many, many variations of blades out there today, these nine blade types cover the most common blade profile types you’ll find today.  These classic profiles are utilized worldwide and their uses honestly depend on whose hand the knife is in.  I personally really enjoy simple/normal profile and drop point profile blades for my everyday carry and outdoors knives, but I also use a variety of blades for woodworking and utility, including sheepsfoot blades as well as hawkbill blades.  I suggest finding what knife feels the most comfortable for you and works for your purposes. Make sure to take other peoples advice with a grain of salt. The knife you carry is a personal affair and only you can determine what blade type you prefer. Make sure to bookmark this blog, email it to a friend or add our RSS feed.  Stay tuned as we explore the anatomy of knives in my next post. Stay an Edge above the Rest!

Are your line of knives american made? if not where are they made?
Thanks, Tim.