How to Sharpen with a Benchstone: The ”Scandi” Grind 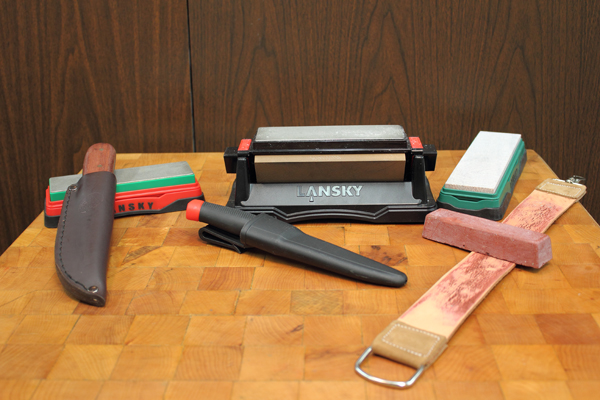 Freehand sharpening is a skill that I often compare to playing an instrument or learning to draw. It‘s a difficult skill to pick up quickly. It takes time, patience and dedication to get anywhere close to perfection. All you need to do is look at the popularity of the Lansky Controlled Angle Sharpening System and other popular assisted sharpening devices like Crock Stick Systems and “Pull-Thru” tungsten-carbide sharpeners to affirm the fact that freehand sharpening is an acquired skill that takes time to learn. There are no hidden ancient secrets to hand sharpening. With good old fashioned elbow grease and persistence, I believe just about anyone can learn how to freehand sharpen.

First step to learning how to sharpen is to understand the edge and its shape. An edge is simply the point where two planes intersect, most often intersecting at two separate angles to form the bevel.. The edge is the true technology behind a blade. How the edge is formed will determine the blade’s functionality as a cutting tool. If you are unfamiliar with edge types, steels and the parts of the knife, I suggest reviewing our earlier post The Secrets of the Steel, Knife Edge Grinds and Uses and Anatomy of the Knife, which will give you a crash course on the parts of a knife, different edge types and the qualities of different steel.

When first learning how to sharpen on a benchstone, I suggest starting with a Scandinavian ground knife also know as a Sabre grind or as I call it in this post, a Scandi grind. The reason I suggest starting with a Scandi ground blade is because of the large, flat bevel that you can lay flat on a stone, without guessing the angle. It’s easy to adjust and move a Scandi blade’s bevel on a stone. I also suggest starting with an inexpensive carbon steel knife such as a MoraKniv (~$10), so you don’t ruin any higher end knives when learning sharpening techniques. (Stay away from Scandi grinds that have a compound, or secondary bevel. They do not use the same sharpening technique and honestly completely counter the advantages of a Scandi’s flat bevel.)

The first step in sharpening is to clean your knife. Use soap and water to clean up any residue on your blade. You don’t want any gunk or food particles getting in the way of sharpening. 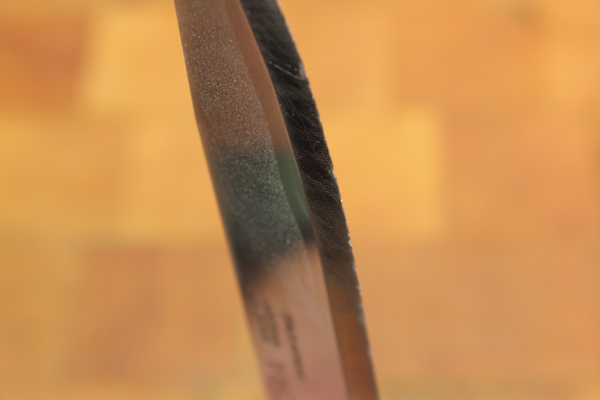 Clean knife with a seriously beat up edge

As you can see, this blade is completely dull, damaged and chipped. Since I’ll be taking this knife from completely dull to hair popping sharp I’ll be using a series of different grit bench stones. I’ll be using the Lansky Tri-Stone Benchstone, which has intergrated three different grit stone (Coarse, Medium and Fine) into one package. If you’d like to learn more about the different types of sharpening elements, I suggest reviewing my previous blog post Choosing Your Sharpener. 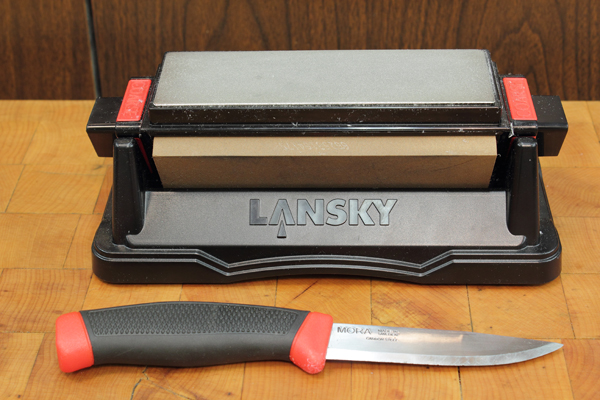 Lying the bevel flat on the stone and lightly pushing forward 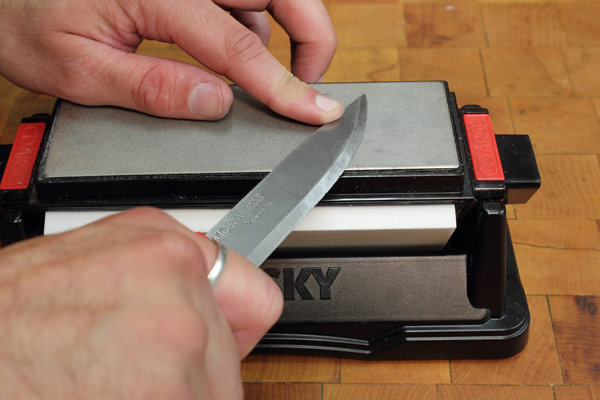 Focus on sharpening one side of the edge until you can feel a burr form on the opposite edge (Use your finger nail to check for the burr). A burr is a fine, wire like raised edge that happens during the sharpening process. Sharpening is essentially the process of “trading” a burr from one side of the edge to the other, while using finer and finer stones to polish a burr until it forms a sharp edge.  Once you’ve formed a burr on one side of the edge, start working on the other side of the edge. You may end up trading the burr between each side of the edge a couple of times on the coarse stone before all the nicks and damage are removed from the edge. Once you’ve removed the damage, start using the alternating strokes between each side to polish off the burr (at this stage it could be referred to as a “wire edge”). This step isn’t always necessary. You can always move to the next, finer stone to polish off the burr formed by the coarse stone. I do this to make sure that after I finished with the coarse stone that I have removed all the damage and my edge is sharp enough to slice paper. 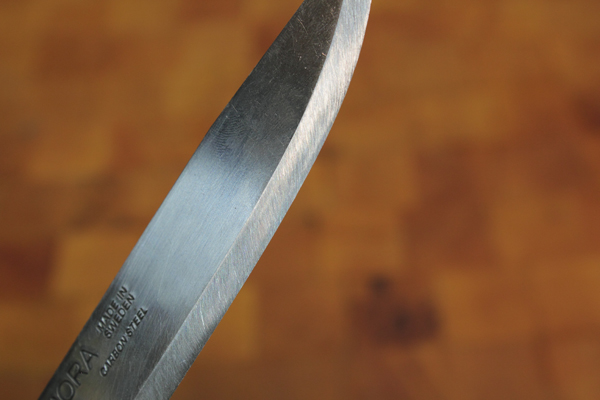 Removed all the damge from the edge. I would describe this as "working" sharp 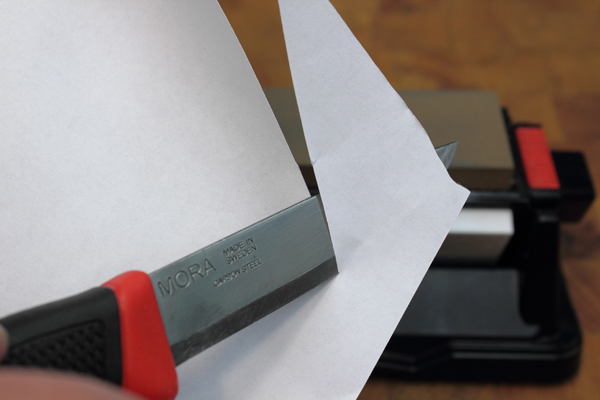 The next step is to use the previous technique with progressively finer stones, in this case the medium alumina oxide stone. Form a burr on one side, and then switch to the other side and polish the burr away while simultaneously forming one on that opposite side. You should keep this process up on the medium stone until you’ve removed all the scratch marks on the bevel left over by the coarse stone. This time leave the final burr on the blade (don’t use the alternate strokes to remove the burr) and get ready to move on to the fine ceramic stone. 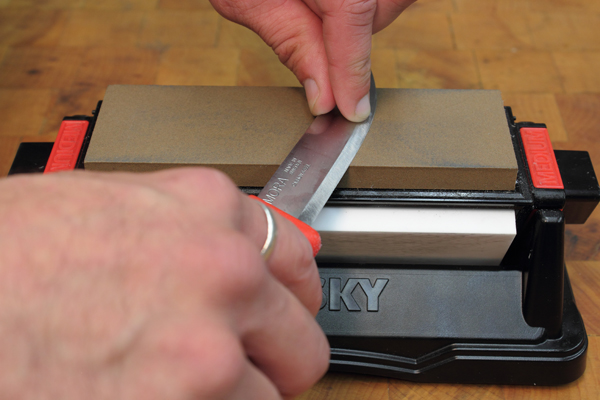 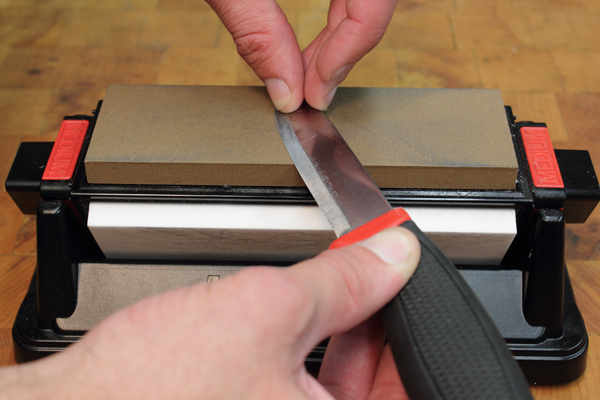 Removing the burr created while sharpening the other side 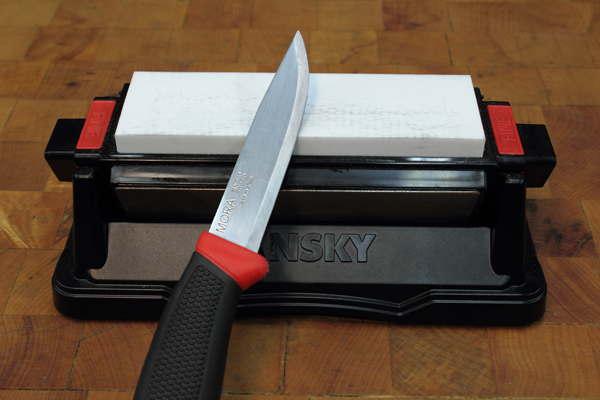 Readyto move on to the fine ceramic stone

Next, use the fine ceramic stone to polish away the burr formed by the medium stone and then continue the process of sharpening on one side then switching over to the next. Generally, the time you spend on the fine stone is very brief. Your edge is established but you still have a rough wire edge. The fine stone will remove the scratch pattern left over by the medium stone as well as polish away the burr and form a very sharp edge. You may not be able to feel the ultra-thin burr formed by the fine stone but I can assure you it’s there. Often I will use alternating strokes on a fine stone, from one side to the other. Once you’ve completely polished off the burr from both sides your edge will be sharp. 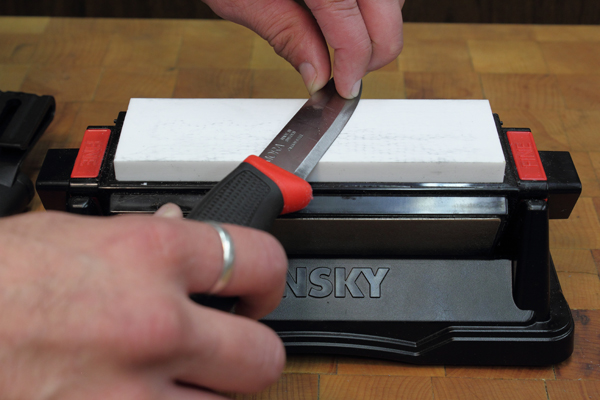 Polishing the edge on the ceramic stone

The next step is to create a micro bevel to polish away any wire edge still present and to give your edge a little more stability. Simply raise the bevel slightly higher on the stone so the flat Scandi bevel is just barley not touching the stone near the face or cheek of the blade (hard to notice a in a picture). Do one or two extremely light swipes on the fine stone like this and then repeat on the other side of the blade. Your edge is now sharp and polished. Most carbon steel blades will be “shaving” or “hair popping” sharp now. Stropping is a good option after this point but not completely necessary. 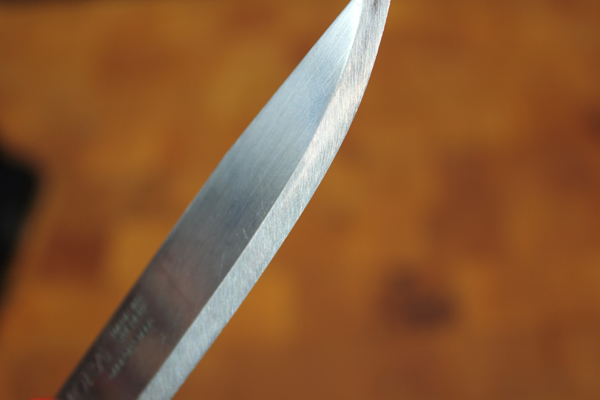 Now go out and dull up that knife.

Be Smart, Be Safe and Stay an Edge Above the Rest!