As long as humans have used knives, we’ve needed ways to sharpen them. According to a study done by the University of Colorado at Boulder, prehistoric people developed a method of sharpening tools and stone knives at least 75,000 years ago.

Western style knife-sharpening, however, can be directly traced back to the “moletas” of Northern Italy. The moletas were knife-grinders who traveled from village to village offering their sharpening services. They originated in the valley of Val Rendena in Italy`s Dolomite Alps, and the first one landed in America in 1886. Within 3 decades hundreds more had joined him.

Unfortunately, the moletas in America fought over knife-grinding territories just like they had in Italy, and in 1930 the Knife Grinders Association was founded in order to settle these disputes.

Almost every big city in America had at least one moleta. Traditionally, the moleta wore a floppy hat and could be found on the street corner, sharpening knives on a pedal-operated grinding wheel mounted in a wheelbarrow. 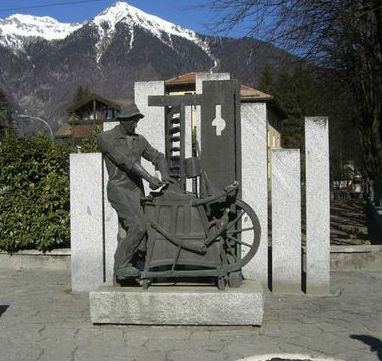 By 1910, the moletas had become successful enough to own horse-drawn carts and by 1930 they were carrying their sharpening supplies in trucks.

Today, moletas still exist but people have also learned how to sharpen their knives themselves. With easy-to-use systems like Lansky’s own controlled-angle sharpening system, everyone can become a bit of a moleta. At the very least, everyone can have an extremely sharp knife.