Why a Manual Knife Sharpener is a Better Choice than Electric

One of the first questions people new to knife sharpening often have is: should I get a manual knife sharpener or an electric sharpener?

I think you know what we’re going to say here. Manual is better. It’s not that electric sharpeners don’t have their uses; they work for people who aren’t particularly concerned about their knives and just want a fast way of getting them to “cut better”.

But if you’ve taken the time to precisely choose the type of knives you want (whether we’re talking about kitchen knives, hunting knives, pocket knives, or any other variety) and possibly have invested a fair amount of money into those knives, you don’t want to run them through an electric sharpener.

The first and most obvious problem with electric sharpeners is that you can’t use them without electricity. That doesn’t help you much when you’re out in the field and need to sharpen your knife. If you’re a person who will mainly be using your knife outdoors, an electric sharpener will be of little use to you.

Electric sharpeners don’t work very well on blades with harder steels. They are mainly designed to sharpen cheap, mass-produced knives the average person might have in his or her kitchen.

Electric sharpeners also remove a large amount of material from your blade.

Unlike electric sharpeners, manual knife sharpeners give the user greater control over angle and consistency. This is important because the angle you use will be different depending on the type of knife you’re sharpening. A fillet knife, for example, will be set to an entirely different angle than a hunting knife.

When you use a manual controlled-angle sharpening system, you can select precisely the right angle for the particular blade you’re sharpening. 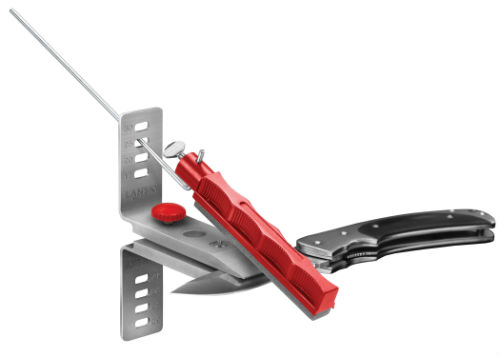 You can use a manual knife sharpener anywhere. They come in the form of larger systems that you might choose to keep at home, and in smaller pocket sharpener styles you can take on the road.

Manual knife sharpeners are, generally, less expensive. There are some expensive manual systems out there, of course, but you’ll find that in the majority of cases, you’ll spend less on a manual sharpener than you will on an electric one.

Lastly, when you sharpen your knives manually, whether on a bench stone or by using a sharpening system, you’re developing a useful skill that will always be available to you. You’ll begin to better understand the kind of care your knives need and you’ll know exactly how to maintain them.

To sum up, when you choose a manual sharpener over an electric sharpener what you’ll get is more control during the sharpening process, less steel taken off your blade, consistent pressure and a precise angle resulting in a sharp edge that’s ready to take on any task.