History of the Knife 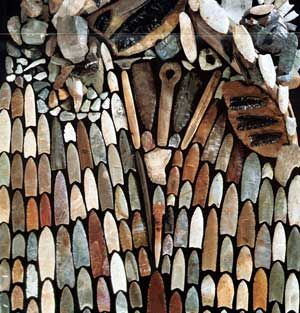 If you ask the average person “What’s the most important piece of technology in history?” What answers do you think you’d get? When I asked this question I got a litany of answers including the following: the wheel (surprisingly the most popular), an airplane, a steam engine, the atom bomb, computers, guns, light bulbs, the brass cartridge and even the hammer. What I don’t hear often enough, and is arguably the most important invention we’ve ever produced is the knife.

Man is defined by our ability to conceive, create and use tools. The knife, and even more specifically the edge, is the original tool used by humans to manipulate the world around us. Without the invention of the cutting edge, man would never have climbed to the top of the food chain, hunted animals, harvested and cultivated food or even built cities. It makes perfect sense why there is such a large cultural movement behind knives and why so many people absolutely love them. Sometimes it can be hard to explain to “non-knife” people why we enjoy and even obsess over our knives and edged tools. The answer is simple, it’s because we are fundamentally connected to knives on the most basic human level. The fascination and love of knives is hardwired into our DNA.

The first edged tools have been recorded to be more than 2.6 million years old, which precedes Homo sapiens. We believe our early hominid cousins developed these primitive tools by cracking round rocks apart and utilizing the sharp edge to process food. These tools were very basic and unrefined but they are the first example of a hominid using stone to create a sharp and resilient cutting edge.  When humans (Homo sapiens) entered the world, an explosion of refined edge tools and the “design” of better stone knives began. This progress has slowly led up to our super “high tech knives” that we use today. It only took approximately 2.6 million years to get the knife in your pocket today.

Example of an early stone blade

Interestingly, the first edged tools used by humans (Homo sapiens) are considered to be “expedient tools”. Much like the disposable culture we have with different products today (razor blade, plastic cutlery, etc), tools we’re made as they were needed and then disposed of. Although there are plenty of examples of refined arrowheads and knife blades, it was probably more likely that early humans prepared these edged tools for specific hunting purposes. It’s likely they carried a chunk of conchoidal fracturing rock (chert, flint, quarts, obsidian) along with another hard object to knock off ultra sharp, thin flakes from chunks of rock. Then they’d use the stone flake as an expedient tool to dress a kill, make clothing or harvest food. When they were done with the sharp flake, they would simply throw it away.

For 99% of human history our only tools were stone tools. That era is commonly known as the Paleolithic and continues through to the Neolithic Age (new stone tools) where a huge explosion of new stone tool designs and implementations were used. It’s only until relatively recently in human history that we’ve adapted to manipulating other materials into better tools and the knife was at the head of that technology race.

In the Lithic Ages, people used a variety of techniques to achieve sharp edges from stone. From the Lithic Ages, humans transitioned to the Copper and then the Bronze Age. These periods are defined by the advent of extracting and processing soft metals such as copper, tin and their alloy bronze to make new tools. Copper and bronze are easy to work and will produce more durable tools that can take more of a beating than stone tools. There was a trade off when converting from stone tools to bronze and copper edge tools. Although they are more durable, they also are not as sharp and have very low edge retention. This invariably led to the need to sharpen an edge when it became dull, which was frequent. Although not the first example of sharpening stones, (as in the Lithic Ages) it is arguably the time when sharpening stones became absolutely essential to the continued use of an edged tool. The art of sharpening was born! It’s interesting to note that the mining of metals during the Bronze Age (copper and tin) led to the establishment of more trade routes and an increase in cross-cultural interaction. This is just another example where the knife has heavily influenced the development of human civilization.

About 3,500 years ago we entered the Iron Age, defined by the mining, processing and creating of the almighty iron tool and especially the iron knife. Iron tools were a huge technological advantage over previous tools. The ability to have a durable material that could hold its shape and edge well was significant. With addition of carbon (wood ash) to iron we were able to create the iron alloy steel. Knives have really changed very little since the advent of the steel blade. Yes, steels have improved significantly throughout the centuries but the same basic process of blacksmithing, cold forging and tempering has changed very little. Steel has uniformly become the absolute standard for knife blades. The next biggest innovation associated with knives was the invention of the folding knife around 1400CE (CE=Common Era= AD.) Since its inception, many modern technical advancements have been applied to the simple folding knife. New handle material, locking mechanisms, blade grinds, and serrations have all upgraded the folding knife, but it still remains essentially the same.

For 99.99% of human history not carrying a knife was a serious impediment. The knife gave us the ability to interact with the world around us. Unfortunately for us living in modern times, carrying a knife is often seen as taboo. I’m sure almost every person who carries a knife today has experienced some sort of negative reaction when someone sees his or her blade. Knives are seen as a weapon first and a tool second. But it’s the other way around. A knife is a tool that can be used as a weapon. But isn’t that true of any tool? A shovel, drill, car keys, or a #2 pencil can all be used as an effective weapon but that doesn’t mean that they are, or classified as such. The knife is the most basic human tool. The connection between a person and their blade extends through human history and connects that person to every single one of their ancestors, just as it is for every other person who has walked this earth. Stay Sharp!