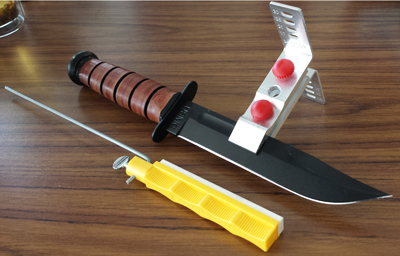 When you first enter the world of knife sharpening, it can seem like there's a whole new language to learn. In this post you'll find some of the most commonly used terms in sharpening.

Bevel – This term is most commonly used to describe the surface of the blade that has been ground to form the edge.

Burr - A burr is a fine, wire-like raised edge that happens during the sharpening process. Sharpening is essentially the process of “trading” a burr from one side of the edge to the other, while using finer and finer stones to polish a burr until it forms a sharp edge.

Multi-angle Clamp – The multi-angle clamp is used to hold the knife in place while sharpening. It also provides several guide holes that allow you to sharpen your knife to your desired angle.

Controlled-Angle System – The controlled-angle sharpening system, originally designed in 1979 by Arthur Lansky Levine, is a complete sharpening kit to help users achieve a razor-sharp edge. All of the Lansky controlled-angle systems include an ambidextrous knife clamp with guide holes for 17°, 20°, 25° and 30° sharpening angles. Also included in the kits are guide rods for each of the color-coded, finger-grooved sharpening hones, as well as honing oil and multilingual instructions.

Freehand –A method of sharpening that doesn’t require the use of guided angles or rods. This term is most commonly used when sharpening with a bench stone.

Grind - to remove material or sharpen with an abrasive.

Grit – Grit refers to the abrasive particles used in sharpening. The higher the grit, the finer. Lower grits are coarser. For example, 1,000 grit hone will be great for polishing an already sharp edge, while a 120 grit hone would work well for reconditioning an edge.

Hone – Hones are included with every controlled-angle sharpening system. They come in various grits so that the user can select which hone will achieve the desired result.

Honing Oil – A specially formulated liquid used when sharpening. Honing oil helps lift metal shavings that can clog the sharpening stone’s surface. (Note: Lansky’s Nathan’s Honing Oil is not recommended for Diamond hones. Diamond hones can be cleaned with a little water, the shavings wiped away with a dry rag).

Mount (Pedestal or Universal) – A device that the clamp rests on top of, allowing for a more hands-free sharpening experience.

Strop/Stropping – Stropping is the process of polishing the blade to a mirror edge after it has been sharpened. This can be achieved using a few different materials including belts and leather stropping hones.